Posted on October 2, 2013 by Hub Coordinator

The Coorong was the birthplace of the Australian Oil Industry. Even before the great American oil rush early settlers were reporting natural oil springs in the Coorong District. 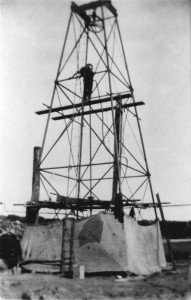 In 1852 while looking for stray horses, troopers from a gold transport found what they described as natural ‘oil springs”. Australian oilmen erected their first oil rig near Salt Creek in 1866. The Australian ‘find”, however never really developed. What was thought to be oil seepage eventually turned out to be decaying algae and not real oil after all.

The algae called “coorongite” (Botryoccus braunii) blooms around edges of the freshwater lakes near the Coorong. Many were convinced that the decaying material was the result of oil seeping from subterranean oil fields.

Controversy about the ‘oil’ raged for over thirty years. When it was finally acknowledged that coorongite was in fact dedcaying algae, some enthuiasts continued to promote its properties. Even today there is a level of interest in the algae as an alternative source of energy.

In 1985 a replica of an oil rig was erected at Salt Creek to mark the location of Australia’s first attempts to find the Black Gold. As pictured to the left. 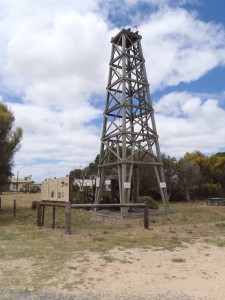