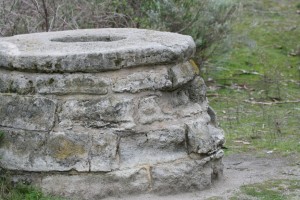 A stone well between the main road and the Coorong 14 kms south of Salt Creek. This well was situated on the eastern side of the old mail track. The origins of the well are a little unclear but the most popular theory is that it was constructed by itinerant Chinese heading towards the Victorian Goldfields in the 1850’s. Another theory is that the well was constructed by a Chinese family who settled at the location and sold vegetables and water to travellers.

It is likely that the well was actually constructed towards the end of 1855 and early 1856 when the influx of Chinese was commencing. Three of these exist in the Coorong area: originally ten feet deep, carefully walled with trimmed stone and overlaid with a circular slab-with an access hole in the centre. Where travellers normally scratched out a temporary soak and moved on, the identity of the men who constructed these Wishing wells with such painstaking craftsmanship niggles our minds. Chinese they must have been, we say, and following a trail to the Victorian Goldfields, but exactly when and specifically by whom and for what purpose is now never likely to be known. There is still need for mystery, wonder and imagination in the world.