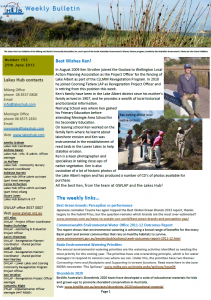 Ken’s family have been in the Lake Albert district since his mother’s family arrived in 1907, and he provides a wealth of local historical and botanical information.

Narrung School was where Ken gained his Primary Education before attending Meningie Area School for his Secondary Education.

On leaving school Ken worked on the family farm where he learnt about lakeshore erosion and Ken was instrumental in the establishment of reed beds in the Lower Lakes to help stabilise erosion.

Ken is a keen photographer and specialises in taking close-ups of native vegetation. Ken is also custodian of a lot of historic photos of the Lake Albert region and has produced a number of CD’s of photos available for purchase.

All the best Ken, from the team at GWLAP and the Lakes Hub!