The History Spot – The Village Settlements

The early 1890’s were a time of economic depression in South Australia, after a series of major strikes and the Australian Bank crisis of 1893. Widespread unemployment caused families to leave South Australia and settle in VIC and WA. The Crown Lands Amendment Act of 1893 saw the establishment of 13 Village Settlements in South Australia. These self-sufficient settlements would run on communalistic principles and give work to the unemployed on the land and keep them in SA. Eleven of these settlements we established along the River Murray including Waikerie and Kingston. One such community was also settled on the Fleurieu at Nangkita.

The main guidelines for the establishment of village settlements were: 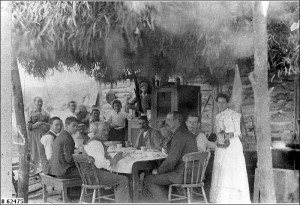 Lunchtime at a village settlement, ca.1898
(Public Domain image, available State Library of SA (Click image for link)
MURRAY RIVER: Men sitting at table being served by women during lunch at a village settlement on the Murray River; they are seated outside a pug and pine building underneath a shelter covered with brush and eucalyptus branches; names not known.

A video released by the State Library available on YouTube explains (thanks to a fine narration by Don Dunstan) the way these settlements came about, as well as their undoing.

Unfortunately few of the settlers had any agricultural experience, and with a socialist structure where everyone is equal, no-one was keen to take orders from anyone else. An advisor, Samuel McIntosh was appointed by the state government in 1896 to advise villagers in matters of irrigation. However, by 1899 the settlements were still being supported by the government and none had become self-sufficient, leading to the establishment of a Royal Commission which found that the communal system had failed and recommended settlements be subdivided into blocks of at least 10 acres and leased to individuals.

Ultimately many of the settlers left, to go to the more successful settlements such as Waikerie, or to return to Adelaide. In December 1901 the South Australian government passed the Village Settlement Act 1901 repealing previous legislation regarding Village Settlements and bringing in the recommendations of the Royal Commission. (See The demise of Village Settlements, SA Memory)

A report in the South Australian Register, Sat 20th January 1900, reports on the state of affairs at Nangkita after the Village Settlement folded: http://bit.ly/QOJInk

Attempted communism aside, it’s clear the Village Settlements were in over their heads trying to live off the land in very challenging conditions, certainly a little local knowledge wouldn’t have gone astray.

This is just one small chapter in SA history and of life on the River Murray, if you have a story to share either as a “history spot” or as a “Letter to the Editor”, please send it in to: info@lakeshub.com